Written by Press Release on 19 December 2009. Posted in New Products.

Portland, OR (PRWEB) December 15, 2009 -- COAST Products introduces two new multi-tools with LED lights built into the handles. The LED Micro Pliers (model C2899) and the LED Pocket Pliers™ (model c5799) are part of the COAST line of Professional Use multi-tools. This line of multi-tools combines modern design, high tech materials and the highest level of manufacturing quality and craftsmanship in each piece. The tools are targeted at all of COAST Products' distribution channels, including hardware, sporting goods, professional automotive and police/military.

"These tools are an important addition to our multi-tool line-up," said David Brands, President of COAST Products. "The LED light on this tool is a feature that other multi-tool manufacturers simply do not have." 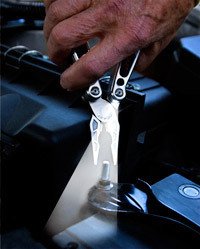 The LED light source on each multi-tool is positioned so that it will illuminate the area of the pliers head and is operated by a simple on/off switch. Both tools feature 440c stainless steel construction and tools. The handles have a sleek chrome finish for durability and rubber inlays for sure grip. The pliers' head on each tool is spring loaded, making the pliers or wire cutters simple and easy to use.

About COAST Products
COAST Products was founded as Coast Cutlery Company in 1919 by Henry W. Brands, the first of three generations of the Brands family who would operate this Portland manufacturer and distributor. Originally established to provide quality knives to the farmers, ranchers and workingmen of the Pacific Northwest, today COAST produces sport knives, multi-purpose tools, LED Lenser lights, and licensed products for Eddie Bauer. In North and South America, COAST is the co-producer and exclusive distributor of the German-engineered LED Lenser lights. Every COAST product reflects an investment in skilled craftsmanship and quality materials and is backed by a lifetime guarantee.