Written by John Stewart on 20 September 2012. Posted in The General's (aka Don Amador) Recreation HQ.

Tesla Continues to be Hot Issue at Concord Meeting 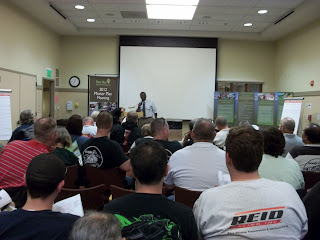 OHVers made a great showing at the District’s public meeting in Concord last night.   About 130 people crowded into a room with seats for 65.   About 40 off-roaders were in attendance and they included a big turnout from the Diablo 4WD club, Red Neck Roosters MC, BRC, REID Racing, Carnegie Forever, and CORVA.  ClubMoto’s Captain Kirk and his son were there too.

The three main topics that rose to the top of the discussion list continued to be OHV or no OHV use at Tesla, future OHV use on District lands, and dog walking.  The Mayor of Concord showed up and visited with the 4WD club.

After talking with several District staff members, I got the impression they regretted the anti-OHV tone and direction of their various narratives to date.   However,  I don’t think they appreciate the fact that many of us feel they have a corrupt CEQA process where local anti-OHV groups had undue influence on the District’s board members and staff in creation of the 2007 Master Plan Map and current planning effort.

In my considered opinion, their anti-OHV narrative is best highlighted in their official June 11, 2012 comment letter on the Carnegie General Plan.

Here is link to the District’s June 11, 2012 Comment Letter on the Carnegie General Plan
http://www.sharetrails.org/uploads/east_bay_district_comment_letterjune11oncarnegieplan0001.pdf


Again, the following East Bay Regional Park District response (Sept. 13) to one of HQ’s longtime friends, Scott Sinclair, shows a high level of arrogance, ignorance, and callous against OHV recreationists in general,  Carnegie SVRA staff,  and proposed OHV use at the Tesla property which is part of Carnegie SVRA.

*Note their response did not address the March 2007 tour and two April 2012 tours with Save Tesla Park advocates.   BRC found out about those tours via our public records act request.  BTW – did any OHV groups get invited to the May 11, 2012 tour?   I also believe if you look at the District’s own “surveys” you will find them to be biased or slanted to achieve a certain result.
I continue to be concerned about what continues to be a truncated quasi-CEQA lite planning process related to the District’s new master plan.

HQ believes that OHV users to must continue to attend the upcoming meetings in Oakley, Fremont, Dublin, and Richmond.   The level of your participation will help decide if the District provides future OHV recreation and if they will back-off their current effort to prohibit OHV recreation on the Tesla property at Carnegie SVRA.

Again, here is BRC Alert with list of meeting sites and sample letter http://www.sharetrails.org/alerts/2012/09/06/extreme-environmental-groups-collaborate-with-east-bay-region-park-district-to-impose-closureagenda-on-propose
Here is BRC News Release on Public Meetings with link to formal BRC comment letter http://www.sharetrails.org/news/2012/09/10/recreation-group-cites-east-bay-parks-violation-sunshine-laws
Also, feel free to check for updates with my good friends at the Carnegie Forever Facebook page http://www.facebook.com/groups/CarnegieForever/permalink/10150997989856599/
See you at upcoming meetings.