Written by Don Amador on 17 October 2012. Posted in The General's (aka Don Amador) Recreation HQ.

OHV and Nature Can Coexist at Carnegie/Tesla? 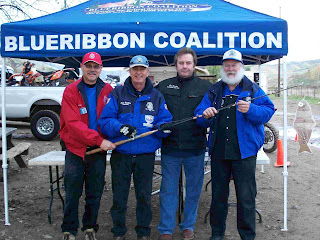 The Recreation HQ would like to give an update on the East Bay Regional Park District’s planning effort and how their narrative has apparently softened a bit when it comes to new OHV use on the Tesla property which is part of Carnegie SVRA.

I thought the Bay Nature article below did a pretty good job of weaving through the concept that managed OHV recreation and resource protection are not mutually exclusive and can and do co-exist on many state and federal lands.

What appears to be a new era of cooperation between the District, OHMVR, and user groups would not have happened without thousands of OHVers and their families showing up at various public meetings and sharing their views both verbally and in writing with District staff and board members.

I believe the various letters from OHV groups including BRC’s documents obtained by a public records act request had helped illustrate to the District that it was engaged in a less than robust quasi-CEQA process with unclear goals and objectives.

In addition, I feel that the OHV Commission’s interest in seeing that OHMVRD and the users don’t get railroaded the District’s public-process - that left out the OHV community as legitimate stakeholders—will have an important role in new outreach by the District to OHV groups and clubs.

Link to Oct. 15 OHMVR Commission Letter to the District

Let’s hope the end result will be mutual cooperation and respect between the District, OHMVRD, OHV clubs, and environmental groups. We need to be ready to review the draft policy document when it comes out in January or early February. Mike Anderson, the District’s lead planner, told me at the Dublin meeting that the public would get a chance to review and comment on the draft policy document BEFORE it goes to the park board for approval.